Past the distorted girl's future lies...

A tide of sorrow sweeps over the world of Arcaea. Experience Tairitsu's torments as she pursues the deeper, twisted pasts that await as well as a treacherous anomaly that lies hidden... Featuring intense, challenging songs.

Vicious Labyrinth is a song pack added in version 1.5.0. It contains six songs with one anomaly song, Grievous Lady, the first song to have a level 11 Future chart. It costs 500 Memories to unlock. It also allows you to unlock two maps in Chapter 1 of World Mode in which you can obtain the Partners Tairitsu (Axium) and Tairitsu (Grievous Lady).

Songs with titles in bold are unlocked in World Mode. 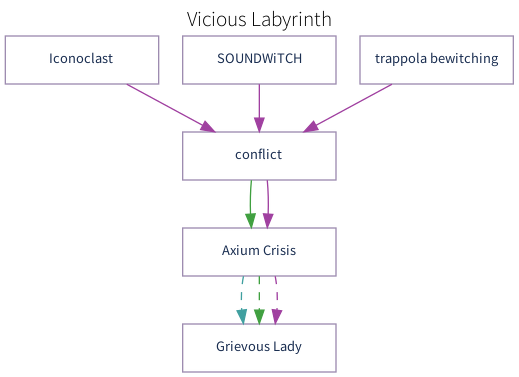 Retrieved from "https://arcaea.fandom.com/wiki/Vicious_Labyrinth?oldid=17341"
Community content is available under CC-BY-SA unless otherwise noted.