Singularity
Luna is one of the partners in Arcaea. She is unlocked by purchasing the Binary Enfold song pack, then clearing Outer Reaches Map 2-3. The map has special unlock conditions listed here.

Luna is Latin for "Moon".[1] An ornament shaped like a crescent moon can be found on her cape.

Luna looks similar to Eto as they are twins. Both look particularly petite compared to the other partners. Luna has short, straight light purple hair with short bangs and long layers framing her face. Her eyes are purple and she has a moon tattoo on her right cheek.

Both twins have the same beret, cape, and pleated-lined shirt but with different colors and ornaments — with Luna's colors being blue and purple, her shirt having white mid-length frilled sleeves, and her ornament being crescent moon-shaped. Unlike Eto, Luna wears a pair of white frilled cuffs on her wrists, complete with purple bows. The twins also wield the same rapier weapon; this has been shown to be two halves of a pair of scissors.

Luna is described as merciless, as stated by the trailer of the Binary Enfold release. Luna also does not feel friendly and affable to other people as well, while daring people to play her challenge, Singularity.

Raw stats wise, she is more focused on FRAG but is generally below average in terms of stats sum (153 compared to the baseline 160). She is then functionally similar to unawakened Kou but with a worse STEP stat, and therefore she is generally inferior to Kou in terms of stats. However, her skill which makes the recollection gauge invisible can be advantageously used to clear the UI of any clutter so the players can focus on the main playing field.

While the STEP stat is below average, as discussed in Hikari (Zero) the low STEP stat can be used for nailing the landing on a Stamina tile. 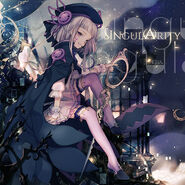 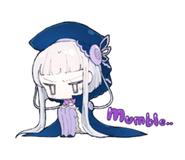 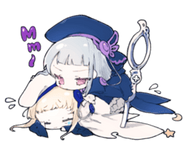 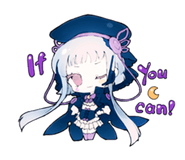 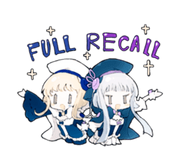 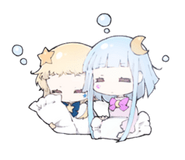 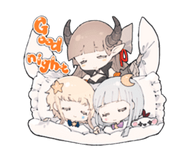