Start a Wiki
Encounter, two people face each other, but the girl is...

A meandering journey, an impossible meeting. One is of light, the other conflict— and now their fates intertwine.
Five new monumental songs stand ready, wherever this meeting may lead..

Adverse Prelude is a song pack initially released in version 2.2.0 with 4 songs. In 2.5.3, BLRINK was added, increasing the total to 5 songs. It requires 400 Memories to unlock. 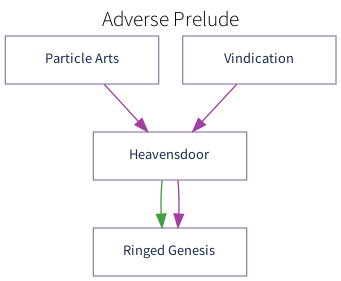 Retrieved from "https://arcaea.fandom.com/wiki/Adverse_Prelude?oldid=16838"
Community content is available under CC-BY-SA unless otherwise noted.